I have two tween-age daughters.  We’ll call the 10 year old Twirly, and the 12 year old Booky (soon to be 13 year old when she will be referred to as the Bratty Teenager.)  Booky, as practice for her soon to come bratty teenage years, has picked up a new favorite saying:   “I don’t like it.”  She says this all the time.

Me:  Have some breakfast.

Me:  Here’s a million dollars.

You get my point.  And her younger sister, Twirly, who is always trying to be like her big sister, has picked up on it too.

It makes me crazy, because I tend to be somewhat of an optimist and an adventurist, always looking on the bright side and up for trying something new.  That is probably exactly why they say it, because they know it makes me crazy!  I have tried to get them to stop.  But since it is a somewhat trivial offense, I didn’t believe my tried and true form of punishment (like taking away their screens) was appropriate.  So I had to get creative.

My girls are both writers.  They are both very creative and artistic.  In fact, it was their interest and dedication to writing that inspired me to give it a try too.  So this gave me an idea.  Let’s try some “Creative Punishment”.

So, I started with Booky, the biggest offender.  I told her that every time she said, “I don’t like it”, she had to write something for me.  And I get to pick the format and the topic.  She had just finished writing a Shakespearean Sonnet for a school assignment, so I threatened that to get her attention.

True to form, we were having our normal after school chat about what we had planned for the evening, and she says, “I don’t like it.”  And then her eyes get big and she cries, “Nooooo, not the Sonnet.”  I grin, but decide to start smaller to convince her to play along.

I say, “So, you owe me a poem…about…a dinosaur.”  She protested, “What?!  No!  I don’t want to write a story about a dinosaur!”  Then I added, “It must take up the entire page, so choose your page wisely.”

So Booky is a bit of an over-acheiver…when not at home, that is.  She gets mad when she doesn’t get 100% on her school assignments.  When she comes home from mission trips, the adults are always commenting on what a hard worker she is.  But at home she tends to try to get by with the absolute bare minimum amount of effort.  So when searching for her “page” for her dinosaur story, she chose an index card.  An index card.  This is the girl who complains when there is a page limit on her written assignments because she always wants to write more.  I call her Booky, not only for the number of books she reads, but also for the number of books she is attempting to write (currently working on two fantasy novels, yes two).  She writes parodies in her spare time, for fun, over 15 so far.  But I get an index card. 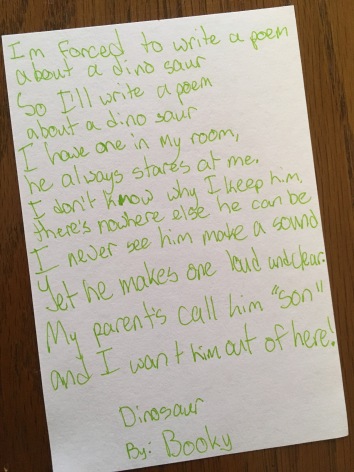 So for the next offense I requested a Haiku.

Clever.  But on the third offense, it really got fun.  I asked for a story about an orange…and a hedgehog.  I was really interested to see what Booky would come up with.  Leave it to her, a Hufflepuff through and through, to turn it into a Harry Potter story…

Harry stared at the hedgehog.  He knew the incantation, he knew the movement, but he couldn’t do it.  But he had to.  This would decide whether he passed 5th year.  He raised his wand and took a big breath.  “Orangeocallyous!” he exclaimed.  POOF!  On his desk now sat an orange.  He picked it up.  He had done it!  He would move on to 6th year.  He tossed it up in the air and caught it.  “Squeak!” it cried in protest.  Wait.  Oranges don’t squeak.  He looked down at it and sticking out from the side was a little hedgehog face.  “Noooooooo!”

Cute!  And then, I asked Twirly to help clean up her room.  “I don’t like it.”  Busted!  I requested a story about a baby chinchilla (we were once big Diego fans).  Here’s her story…

One day there was a chinchilla named Rebecca. Rebecca had a cookie. She loved cookies, there was something about this cookie that disgusted her. She stared at it with a curled nose and a snarl. Suddenly there was a sound coming from in the bushes just below Rebecca’s tree house. She put the cookie down on the table, ran outside and studied the ground. There was no sign of a predator or her mom, who she had been waiting for to come home from Seattle. Then as she opened the spruce wood door to return to her home she saw her cookie hop off the table and out the door… TO BE CONTINUED WITH MY NEXT PUNISHMENT!

Love it!  Leave it to Twirly to already be planning for the next offense.

So the “I don’t like its” have decreased.  But my husband caught Booky in one more, and he pulled out the big guns…a Sonnet…about a chocolate malt.  This may end up being my favorite form of “punishment”!

My husband got his sonnet, and we haven’t heard the “I don’t like it” since.  I’ll have to apply it to another annoying bad habit (like “Your face”!  Middleschoolers have the weirdest expressions.), so we can get more fun stories.  Stay tuned….

Create in me a pure heart, O God, and renew a steadfast spirit within me.